Some good friends, who live abroad but are in town, announced that they could pop over for a catch up. I had suggested that I might make them some fresh pizza with a few glasses of Spanish Rioja. I decided, at 8am, that I would make a pavlova to round off the meal. That meant that I had to somehow teleport home at lunch time and throw one in the oven to bake slowly for a couple of hours to ensure it was cool in time.

This is the mixing as it happened (yes I did have the presence of mind to take pictures in the 30 minute window available to me). Stiff peaks before adding the sugar. 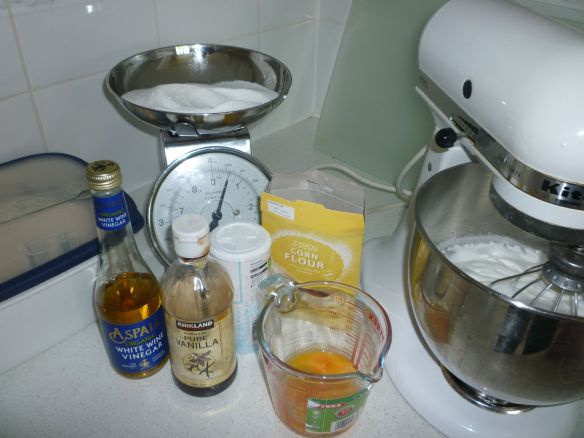 Adding the sugar 3 spoons at a time.

After about 10 minutes the incorporated sugar and egg white should look glossy and stiff comme ca.

Then fold in the other ingredients, which if you have never made a pavlova before may seem a little alien to a desert recipe. Vinegar? Salt? Cornflour? 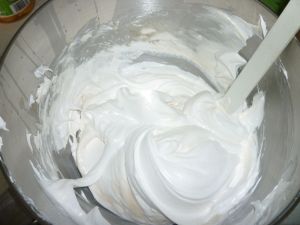 Then spread out to your desired shape onto some baking parchment. 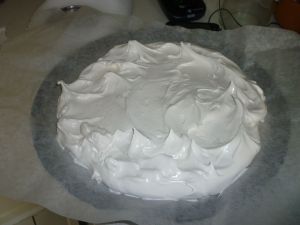 I tend to make it into a disc shape for easiness but I am sure that the more creative amongst you could pipe and sculpt it into a hedgehog, dinosaur, poodle or polar bear. I only had a lunch break remember. :0)

When I returned from work it was nice and cool and ready to be topped.

Crunchy and gooey all at the same time

I know that strawberries are not the most exciting topping choice but they were very juicy, plump and aromatic. I lay them on a bed of just whipped double (heavy) cream.

Top of the pops

I think they liked it!

Whisk egg whites to stiff peaks and then gradually add the sugar until all incorporated and glossy. Fold in cornflour, salt, vinegar and vanilla. Bake “slow & low” (130 deg c) for a couple of hours and allow to cool in the oven (if you can, overnight). Simple yet quite impressive. Enjoy.